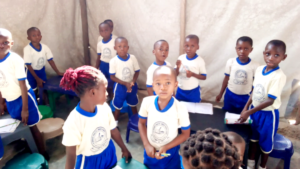 Undoubtedly, Nigeria is facing a serious crisis wherein a large number of children are in desperate need of education. An observation tour across many states, cities and towns in Nigeria will reveal to you how many poor children are on the streets when they should be in the classroom. While some of these children are hawking on the streets for survival, some of them have nothing to hawk and so they resort to becoming beggars. Unfortunately, a larger part of the Nigerian public have a very low awareness of this problem, as most people are only concerned about their own lives and not particularly interested in what’s going on in the lives of others – especially the poor children on the streets.

However, a few states in Nigeria are doing their best to ensure every child gets an education. Some have made policies to ensure that public schools provide a free or low-cost education for children; they also encourage parents to take their children off the streets and get them to the classrooms. For instance, the governor of Oyo State, Mr. Seyi Makinde, declared free education for children beginning from the year 2019, leaving no excuse for poor parents or guardians. His administration had inherited over 400,000 out-of-school children some of whom are now enrolled in one public school or the other.

“Train up a child in the way he should go, and when he is old he will not depart from it” – Proverbs 22:6 NKJV

Some private organizations and wealthy individuals in the country make immense monetary contribution toward providing affordable or free education for poor/orphan children; but most of the time, these never make it to the grassroots due to the bloated bureaucracy of most state governments. The only ones who make it easily to the poor children are those who bypass the government and go directly to orphanage homes and poor families in order to make education accessible through grants, scholarships and annual payment of their school fees. Although it is a lot of work visiting orphanages one after the other, but it’s usually worth it in the end because they actually get to see their beneficiaries go to school. Besides, it’s faster and more effective when they interact directly with the needy children as this also makes monitoring or follow-up easier.

Understanding that the Nigerian government is limited in its capacity to educate every poor and orphan child, a few churches have also begun to provide free education for orphans and children from poor families. In the Bible, God clearly shows His desire that every child be trained, educated and well-instructed because He knows that it is a strong foundation for the future of that child and the society at large. No matter what it may cost, every one of us must help to fulfill that desire of God’s heart.